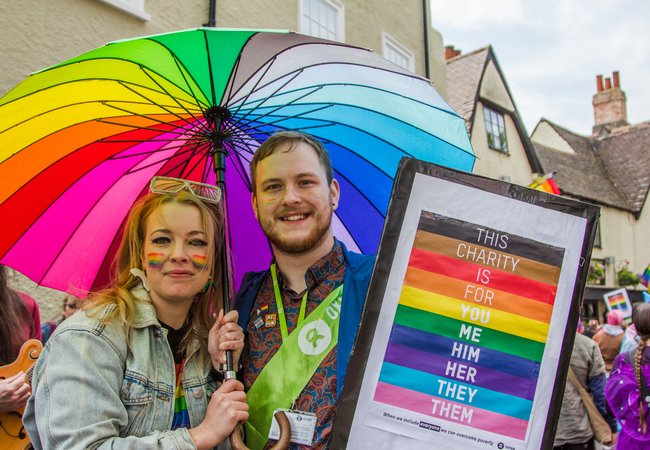 Oxfam believes that only when we respect and uphold all human rights can we overcome poverty. We subscribe to the UN Universal Declaration of Human Rights. We believe everyone has the human right to dignity and to freedom of sexual identity, gender identity and expression. Because none of us are safe until we are all safe.

What does LGBTQIA+ stand for?

Why does Oxfam support LGBTQIA+ people?

Because of discrimination, LGBTQIA+ people globally are more likely than others to:

This is why supporting LGBTQIA+ people is part of our work to end poverty and inequality.

Too many people still face violence, inequality and even torture or execution because of who they are and who they love. I want to recognise the additional challenge of intersection with race for queer/trans people of colour. As an organisation, we must be tireless in our commitment to diversity and inclusion and ensure that this translates into clear and specific actions in support of those we serve and our staff and volunteers.”

What is sexuality and sexual orientation?

Sexuality and sexual orientation are often used interchangeably. Sexual orientation is about who someone is attracted to and who they form relationships with. Sexualities include lesbian, gay, bisexual, asexual, pansexual and more.

Gender is the word used for socially constructed ideas about behaviours, roles, expressions and identities of girls, women, boys, men, and gender-diverse people.

Why does Oxfam take a feminist approach?

Oxfam supports women and people who experience gender-based discrimination to claim their rights. This includes trans women, trans men and non-binary people. We support everyone to dismantle unequal gender roles. We believe poverty can only be overcome when all people are treated equally. When everyone's human rights are respected and upheld. And when everyone has the freedom to make choices about their lives. Feminism is about equality and fairness.

What is an intersectional feminist approach?

An intersectional feminist approach acknowledges that different parts of our identities can be used against us at the same time.

An intersectional approach also takes into account other forms of oppression. Including discrimination against people on the basis of their sexuality, gender identity, disability or class.

Why is an intersectional approach relevant to Oxfam’s work?

An intersectional approach helps us to see that hundreds of millions of people live in poverty not because of who they are, but as a result of unequal systems. This knowledge is important in understanding the root causes of inequality and poverty – and helps us all to work for meaningful change.

The unequal systems we live with and in are linked. For example, a Black LGBTQIA+ person is more likely to experience inequality as a result of their race and queer identity being used against them. This means they are more likely to live in poverty than a white LGBTQIA+ person. Or a Black person who is heterosexual and cisgender. We need to break down all the types of systemic oppression people face so we can live as equals.

Intersectionality – More than one part of your identity being used against you.

Systemic inequality – The injustices between people and groups giving power and advantage to some over others.

Homophobia – Fear or hatred of people who are attracted to people of the same gender.

Cisgender - Their gender matches the sex they were assigned at birth.

People live in poverty not because of who they are, but as a result of unequal systems.”

We can only overcome poverty if we include everyone.”

We are led by the people we work with, in solidarity (for a common cause). This means working to understand how different forms of discrimination make things unequal. How people who are LGBTQIA+, people who experience racism, or people with disabilities, might have different needs. And experience different barriers to achieving their human rights and equality.

Black trans people, who have always been at the forefront of the LGBTQIA+ rights movement, experience intersecting discrimination and harm. They must not be forgotten in our anti-racist commitment.”

What are sex and gender-based rights?

People's sex and gender can be used against them. We believe everyone has the human right to freedom of gender identity and expression.

In our work towards Gender Justice, we champion the rights of all people – women (including trans women), as well as non-binary people and trans men. We understand that patriarchal systems – where men hold the majority of the power – harm everyone.

What is gender justice?

Oxfam understands gender justice as the full equality and fairness between girls, women, boys, men and gender-diverse people in all areas of life. Until all people can share the power to define and shape the policies, structures and decisions that affect their lives and society as a whole.

Why LGBTQIA+ rights are human rights essential to gender justice

Gender norms (like stereotypes about who does what tasks at home) contribute to inequality between men and women. Discrimination against LGBTQIA+ people often takes the form of gender-based violence. This means queer people are discriminated against because they do not conform to gender ‘ideals’ (like being stereotypically ‘masculine’ or ‘feminine’). This degrading treatment violates their rights.

Transgender people do not conform to the gender typically associated with the sex they are assigned at birth. Transphobia means they are discriminated against on the basis of their gender. Transgender people also experience high levels of violence, because they are transgender. Gender justice must include people of all genders. Because justice is not justice if it is not for everyone.

How are gender and sexuality related?

For homosexual couples, homophobia often takes the form of discrimination on the basis of not doing what is expected of a ‘man’ or a ‘woman’.

For example, research has shown that bisexual people are more likely to be victims of sexual violence than heterosexual or homosexual people. This is thought to be linked to discriminatory bi-phobic stereotypes that are connected to negative norms about gender and sexuality.

This is why inclusion of LGBTQIA+ people is essential to our work toward gender justice.

We know we are at the start of our own journey of trans-inclusion. We have sometimes made mistakes and have much more to do. Oxfam will not tolerate any form of transphobic discrimination and we are committed to creating a culture which is fully inclusive and consistent with our values. Our places of work should be safe and respectful spaces.

We fully affirm the right of all people to freedom of gender identity and expression, and we will do everything we can to ensure that this right is respected and upheld within our organisation and through our work. There must be no place in Oxfam for transphobia.”

The existence and rights of trans people takes nothing away from the very important work we as an organisation are doing with regards to combatting discrimination based on sex and is very relevant to work that relates to gender identity. We are also quite clear on the difference between sex and gender.”

‘Equality’ must include everyone or it is not equality. For this reason, our commitment to gender equality includes trans people.”

What does Oxfam mean by ‘trans-inclusion’?

Trans-inclusion means including trans women, trans men, and non-binary people. In all their diversity and expression in the different contexts and cultures in which we work.

Gender justice typically focuses on discrimination against (cisgender) women in a system in which (cisgender) men have more power and resources. A trans-inclusive approach also accounts for the ways that transgender people can be harmed in similar and different ways by the same system.

A trans-inclusive approach doesn’t just recognise that transgender people exist. It actively works to understand and address the ways that trans people experience harm. For example, barriers to accessing healthcare, housing and more.

What is Oxfam doing to promote LGBTQIA+ Rights?

Oxfam does not specialise in LGBTQIA+ rights, but we do work on a small number of programmes to support LGBTQIA+ people. In Lebanon, we are advocating for the rights to access housing and healthcare for LGBTQIA+ people. In Cambodia and Laos, we support the Voice project, which provides a platform for LGBTQIA+ advocates as well as people experiencing different forms of oppression. 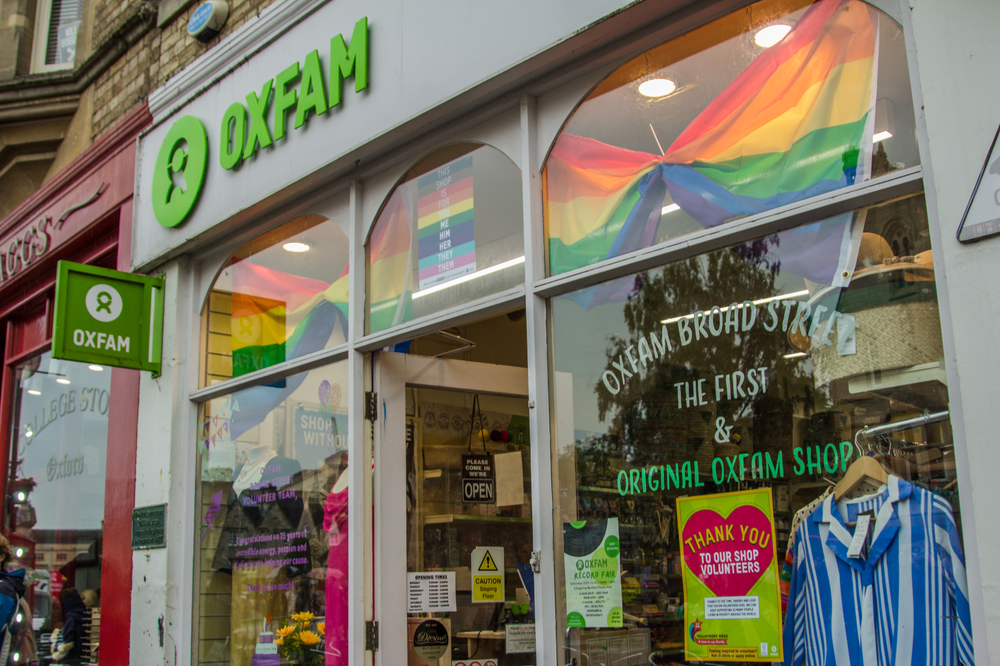 Oxfam's 2022 Pride campaign focuses on including everyone. Because when we include everyone, we can overcome poverty.