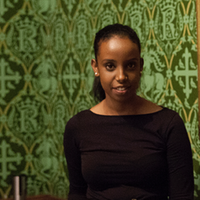 As a typical millennial, the first I heard about the news of George Floyd’s death was on Instagram.

As I was scrolling, I saw a picture of a black man and a police officer and before even clicking play, I knew what was happening. Again.

For a few days, I tried to run away from the matter, and I am sure others were doing the same, trying to mentally protect myself during lockdown from further heartache. But my thoughts would not let me escape it, and as deep as my African roots lie, so do the wounds of racism. Every time the image came to my mind, I had an automatic physical reaction, I wanted to vomit and cry at the same time. I wanted to be in a place of readiness before entering the conversation, but you can never run away from reality.

I could, as many could, predict what would happen next after that video circulated. Because sadly this isn’t the first time, and sadly it will not be the last time.

The old tape started to play: the public outcry, the protests, the famous black American stars speaking out and the woke millennials and liberals showing their solidarity – and of course, let’s not forget the social media trolls. Everything went according to script.

But what I wasn’t ready for was the level of outrage and anger – the days of protests in the US and around the world, which still continue until today.

Like every black person living in a white majority country, I know there are many white friends, colleagues, neighbours that want to help, but just do not know what to do or even say. I know silent ally, you felt the rush of human emotions and pain when you saw another human unjustly killed but do not know how you can help, support or speak about it.

And dear silent ally, I know you have questions about what is happening today that you are too fearful to ask because you’re too fearful to enter the conversation about racism and too scared to be labelled ignorant for a misstep. But this isn’t the time to remain silent, silent ally, this is the time you should reach out to your neighbours, friends, colleagues of colour and learn and educate yourself on their lived experiences in your country, because the truth of the matter is that racism is everywhere.

So silent ally, let me give you a glimpse into my experience as a black woman in the UK.

I wasn’t introduced to being different until I was 6 years of age, when a girl I attended primary school with took my best friend and said to me:

“My Dad said that we shouldn’t play with people like you.”

I was sad because a best friend to a six-year-old is your entire life. I didn’t understand what this blonde young girl meant when she said, “people like me”. I wondered what made me different to her and why I couldn’t be her friend, and who I was meant to play with at school. That day I went home, and my mother introduced me to the concept of racism.

And of course, I cannot say that I have experienced the level of racism that many others face in the UK or the US. As a black woman, racism targets you in a different way to your black brothers. You don’t have the same fear because you are not as often the target of police or law enforcement. You are not stopped and searched for no reason. You are not the person who makes women hold their purses that much tighter. You are not that person who makes people walk faster or cross the street if they see you.

As a black woman, however, you are as invisible.

But let’s talk about the black man growing up in white Britain because George Floyd was a black man and cannot be forgotten. Growing up with male black cousins in the UK, I have seen how they were conditioned to assimilate and never stand out, to never talk loudly or walk loud. How my aunts and uncles policed their haircuts and clothes, making sure that there was no reason for them to stand out and no reason for them to miss out on opportunities for being just too different. They all worked hard, got educated and climbed the social ladder in Britain.

And isn’t this the story you want to hear about white Europe or Britain? That if you work hard and get educated that you will escape “poverty” and you will succeed. The capitalist dreams. The Britain we were all led to believe in. But that is not the reality that millions of Black British people live and breathe every day.

So dear silent ally, let’s step away from looking at the US as if it is an anomaly and Europe is any better. We all need to accept the truth – that many black communities in Europe face systems of racism and oppression. That ethnic minorities are disproportionately affected and dying from the Coronavirus in the UK and the US. In moments of crisis, black communities and minorities are ever more so invisible. So dear silent ally, do not forget us, do not ignore us and do not ignore racism.

The protests in the US are not just about police violence but reflect the anger and frustrations that many black people feel in white Europe.

So dear silent ally, feel uncomfortable, educate yourself on the black experience and reach out to the communities of colour. Because, as Lilla Watson said, “If you have come here to help me you are wasting your time, but if you have come because your liberation is bound up with mine, then let us work together.”

Here are some recommended books, podcasts and organisations to begin your journey towards understanding our experience.

Sagal Ali grew up in the UK and now works for Oxfam Novib in the Netherlands on the Work in Progress Project.