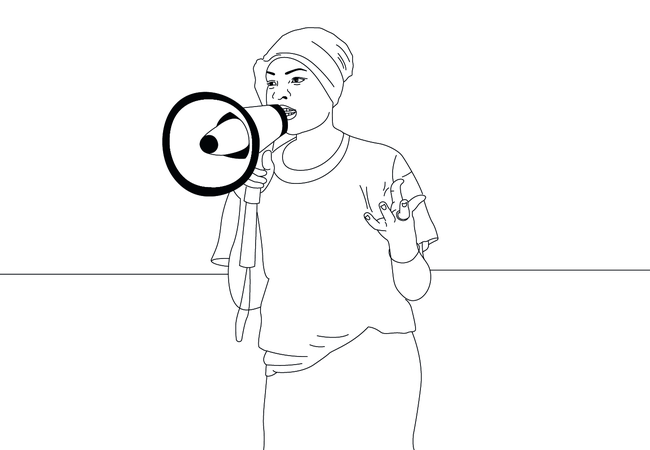 How to make valuing all women's work a reality

We must redefine what 'work' means so all the work women do - paid and unpaid - can truly be valued. Here's how you can help.

in households globally is done by women

An equal right to be invested in

A lot of the work women do is unpaid or low paid. This is true in the UK and worldwide.

This is because society has always had rigid rules around men’s roles and women’s roles. And strongly held beliefs and attitudes about gender. And about women’s abilities.

No one ever wrote down that this work is meant for women.”

Cynthia, 26, Zimbabwe. Cynthia goes to collect water for her family at 4.30am every day.

While these rules have changed in some cases, some rules, such as who looks after the children, does the cooking and runs the home, have mostly stayed in place.

In many parts of the world, while women are now in paid work, they are paid less for the same work, are often in low-paid positions or vulnerable work, and do most of the unpaid care work. As a result of unjust systems, the most precarious, insecure and unrewarded work is commonly done by Black, Indigenous, People of Colour (BIPOC) and/ or migrant women.

The work women are doing is taken for granted, ignored, uncounted and yet invaluable to societies, economies and companies.

The true value of all women's work deserves to be recognised, fairly measured and invested in as part of the global economy.

Women have an equal right for their work to be rewarded, to work free from violence and harm, and to live free from poverty.

I want to develop myself and escalate women’s work and the women’s unit and I hope our project will be positive, successful and accepted by society.”

We might think of work as anything someone is employed to do. But informal and unpaid care work is carried out by 1.3 billion women around the world. The majority of these women are Black, Indigenous, People of Colour (BIPOC). And that work is just as much work as the work people are formally employed to do. The pandemic has made it especially clear that unpaid care work and domestic work are as important as paid work. The wellbeing of households, families and economies depends on the care and domestic work.

Too many women have little control over their time, income, and safety. This has huge implications on women's lives. It also makes it impossible for them to fight the systems that steal their time, locking them into a vicious cycle of poverty.

What is informal work?

Informal work is work done without job security. And without basic job benefits, such as, holiday, sick and maternity pay.

Companies exclude many workers in their supply chains. They do this by outsourcing production and distribution of their products to ‘self-employed’ or informally employed workers. They avoid responsibility for the costs - including minimum or living wages - of family, rest time, or illness. Women and Black, Indigenous and People of Colour are crowded into this informal/outsourced employment.

The lack of universal entitlements remove informally employed and unpaid women workers of their status, dignity and rights.

I want to work the hours which have better pay, so I can have my children with me and I can raise them well with good educations. I want my children to be close to their parents so they can have a better life.”

Lan*, 32, a migrant worker, while working in a factory in Dong Nai province, southern Vietnam, which produces shoes for global fashion brands 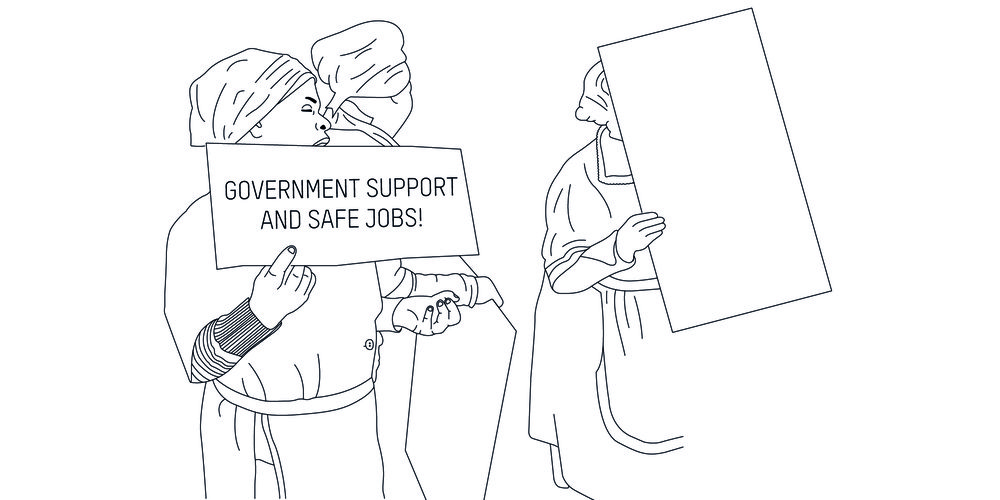 What is unpaid care work?

42% of working-age women are unwillingly outside the paid labour force because unpaid care responsibilities take up their time.

By the time childcare and travel costs are paid, it doesn’t leave much left so we don’t have much money as a family. I stay in work to help with bills and for the future not because it is financially rewarding. I know when both my children are older, it will help that I have stayed in work. Its just a struggle trying to make ends meet now.”

Why doesn't women's work count when we measure economic progress?

Economic models and labour markets are racist and patriarchal. They protect those with wealth and power. And allow systemic exploitation.

There is a global data gap on how race, ethnicity, sex and gender intersect to exclude women, especially women of colour, from dignified work. This represents a fundamental - and not-accidental - barrier. The data gap stops all of us from building better financial systems, regulation and supply chains.

What is the value of the unpaid care work women do?

It is estimated that if all the unpaid care work women did was properly invested in, it would count as the third biggest sector. This sector would contribute more than manufacturing, commerce or transport. Instead, many women who have to do unpaid care work rather than being employed have little time to fight the system that is pushing them into poverty.

How has Covid-19 affected women?

Oxfam calculated that 8 powerful supermarkets increased dividends paid to shareholders from $10 billion in 2019 to $22.3 billion in 2020, yet ignored the plight of thousands of migrant workers caught in a Covid outbreak in Thailand supplying them with seafood.

The pandemic has made the unfair economy more visible but also much worse.

While some have profited vastly, extra caring responsibilities and zero-hour or non-contracted (informal) workers have been excluded from most pandemic relief schemes.

The pandemic has also meant even more job losses for women. In the UK, women were about a third more likely than men to work in a sector shut down by the pandemic (such as retail and catering).

Any Covid recovery can’t be just unless women, LGBTQIA+, racialised and other marginalised communities’ voices are represented – in decision making and in funding.

Care work is for everyone to do and not about gender roles. Any good Covid recovery plan needs equal distribution of care work.

When Covid-19 hit Lebanon in 2020, Ethiopian migrant domestic workers – who were unprotected by local laws – were left without income, housing, or legal protection.

How is the climate crisis affecting women?

Climate change is threatening humankind and pushing people into poverty. It is destroying crops and water sources. What’s more, the unfair expectations that women face mean they’re the ones more likely to go hungry when food is short. And to fall back on unsafe work when harvests fail. They’re likely to be the ones walking further to collect water when it’s scarce during more frequent and harsher droughts, often at risk to their own safety.

Being a grandmother is nice when there is food in the house. When you plant and then the sun scorches your crop, you feel demoralised. Some crops are now coming up, but I’m not sure if we will get yields.”

Mirriam, farmer, Zimbabwe. The Meterogical Service Department has installed a weather warning system nearby with support from Oxfam. Mirriam gets weather alerts via text now.

How is conflict affecting women?

Women are experts in building peaceful futures for their communities. Any efforts to resolve the conflicts and their root causes will require women to play a full and equal part.

Women campaign to bring about peace at the local level. Even when marginalised at a national level, women continue to call for human rights and call out the challenges communities face. Many women in conflict have to and end up filling gaps when men and youth take up arms. They pick up the burden in and out of the home. All this despite being subjected to violence. Women-led organisations deliver humanitarian work. And where possible, development work. They are a core part of civil society.

My passion is hairdressing, I had a salon back home... Hair is my identity, it’s people’s identity, it’s important to look good. Because I have a bit of money I am able to buy items for my children. I just want to keep being a hairdresser and I want to grow. I want my children to be able to go to school and have a better life, I want to keep working in the salon so that everything is great.”

Faila, refugee hairdresser, 20, Northern Zambia. Falia and her family managed to escape violence in the Democratic Republic of Congo. Oxfam supported the group of hairdressers with salon equipment.

How you can help push for a fair economy for women

This isn’t about getting more women into work, it’s about changing the system that too often ignores, oppresses and excludes women.

This is about women’s fundamental rights. About pushing for an economy that works for all people and our planet.

As global citizens, we all have a part to play.

Together, let’s fund, campaign, and join the growing global movement. Let's make a difference in the lives of 1.3 billion informal women workers and unpaid carers worldwide. And join together to profoundly change our global economy. For a future where everyone has the power and respect needed to overcome poverty and injustice for good.

That is the most enjoyable thing, empowering my community. Because if a community is not empowered, we will live in poverty forever.”

How you can help us redefine what we mean by work

The very definition of work must transform.

Women have an equal right for their hard work to be rewarded and protected. To work safely from harm. And to live free from poverty.

For the true value of the work women do to be respected, recognised, redistributed and reduced, as well as fairly measured and invested in, as part of the global economy.

We want to see millions of informal women workers and unpaid carers get the same rights as those in formal contracted and ‘quality’ jobs. This must include the right for workers to participate in economic decision making. Women migrant, Black and minority ethnic workers must be included.

We want to see a shift so that women’s informal and unpaid work is concretely valued by governments and businesses.

Truly seeing all women's work valued will mean things like increased government spending on social care, and company policies such as sick and parental leave. We also want to see a societal shift in how work is publicly viewed and talked about, recognising the effort and true value of all work.”

How will we know when it's working?

We’ll know it’s working when millions of women who contribute to their societies and economies through informal jobs and unpaid care work have their work recognised, measured, invested in and valued. And are ultimately out of poverty.

How are women fighting the system that is pushing them into poverty?

Around the world today, you’re more likely to be poor if you’re a woman. But we’re working with communities to change that. We’re helping more women to earn a living, understand their rights and challenge discrimination.

In Zimbabwe, we’re working with people like Paulina to challenge the attitudes that can stifle women’s potential – helping her family to beat poverty for good.

Now that I am getting help from my husband I feel free.”

Paulina and her husband Orpheus live in Zimbabwe. They took part in Oxfam’s We-Care project, where they worked on sharing household jobs and childcare more fairly. Now Paulina has time to weave mats to sell. 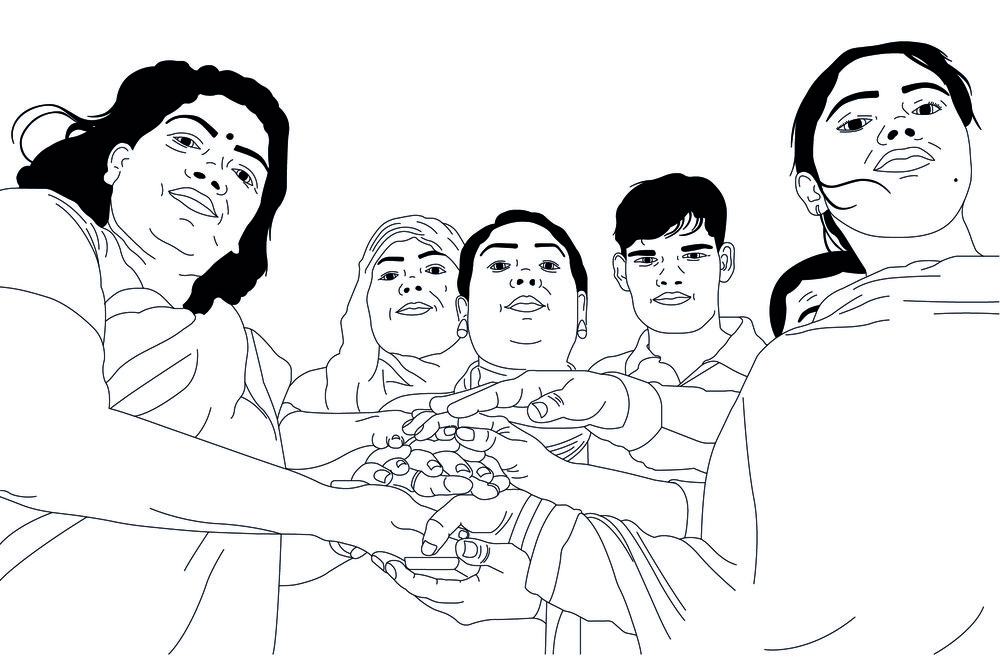 Together, let’s fund, campaign, and join the growing global movement and make a difference to the lives of 1.3 billion women workers worldwide. Let’s join together to profoundly change our global economy, for a future where everyone has the power and respect needed to overcome poverty and injustice for good.”

The route out of poverty is to value women's work, not to erase it.

Learn about gender equality and take action for a fairer world. Updated for 2022, this assembly and activities are suitable for ages 9-14.

The potential for lasting change lies in the hands of millions of women currently living in poverty.