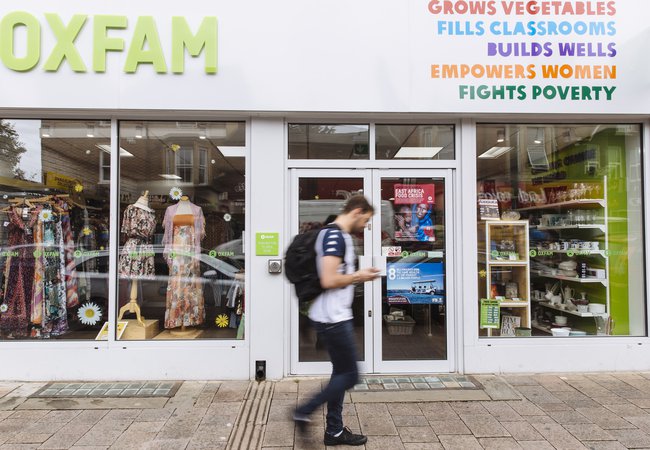 Over 75 years. One amazing movement to end poverty.

Oxfam is born. Ever since, determined people like you have kept up the vital work started that night – and changed so many lives worldwide.

The Oxford committee launches ‘Greek Week’ and raises £10,700 for the Greek Red Cross. That’s more than £370,000 in current money – an incredible effort from one city in wartime Britain.

Famine committees around the UK – including in Oxford – get behind the campaign to persuade the UK government to let Brits send food parcels to Germany.

As the US Marshall Plan takes effect, most of the famine committees around the UK call it a day. The Oxford Committee fights on, boldly pledging to relieve “suffering arising as a result of wars or other causes in any part of the world”.

Leslie Kirkley becomes General Secretary, and so begins his 24-year tenure at Oxfam, during which he transforms the organisation from a local charity into a world-renowned aid agency. His efforts later earn him a CBE and a knighthood.

Famine hits Bihar, India. For the first time, the Oxford Committee responds to an emergency in a developing country.

We launch our first response to a disaster, in this case an earthquake in the Ionian Islands in Greece. Leslie Kirkley himself (see 1951) flies out to assess the damage.

Struggling communities in Algeria, Kenya and Tanzania are given financial support, as our work reaches Africa for the first time.

Support for South America. True to its aims to provide relief wherever it’s needed, the Oxford Committee funds its first project in Brazil.

World Refugee Year. With many Europeans still living as refugees after WWII, Oxfam General Secretary Leslie Kirkley is appointed Chairman of UK Publicity for the national campaign to ‘close the camps’.

Our small army of ‘pledge giving’ collectors begin asking neighbours and workmates to give a shilling a month in return for a small newsletter. Within four years, 26,000 collectors are raising £200,000 from 300,000 pledged givers.

£20,000 arrives in the mail in response to our press adverts about famine in Congo. Your incredible support has saved countless lives in emergencies ever since.

Heard of The Beatles? No, us neither. Still, they were kind enough to get involved in Oxfam’s Hunger £Million campaign back in 1963, apparently.

Oxfam Canada, the first of the international Oxfams is launched. Today, we’re a confederation of 19 organisations working in around 90 countries worldwide.

Disasters Emergency Committee (DEC) formed. In the wake of the Skopje earthquake disaster in the former Yugoslavia, the DEC is formed, consisting of Oxfam, the British Red Cross, Christian Aid and War on Want.

OK, so you may have noticed that we did actually exist before 1965. But as we mentioned earlier – it wasn’t until 1965 that Oxfam was formally adopted as the Oxford Committee’s new name.

Oxfam's response to floods in Bihar, India is supported by £50,000 generated by a growing number of sponsored walks. Youth Groups are also playing a big part in what we do – there are now 100 across the UK.

Our first Latin American office. With Oxfam's reach and reputation continuing to grow, we set up our first office in Latin America – in Lima, Peru.

Following the creation of Bangladesh in January, we launch the biggest aid package in our history – £1 million for water transport, re-housing and agricultural support.

Our recycling plant opens in Huddersfield. 12,000 tonnes of donated clothes we can't sell now come here each year – and nothing goes to landfill.

With Oxfam increasingly making a noise about the major causes of poverty, a campaigns department is set up, with area campaigners recruited in the early 1980s.

Public outcry follows a TV documentary showing conditions in Cambodia after the overthrow of the Pol Pot regime. Blue Peter launches an Oxfam-linked appeal, hoping to raise £100,000. Within three months, an incredible £3 million has been donated.

We publish a new report, 'Bitter Pills', on the relationship between pharmaceutical companies and poverty. It’s the latest in a series of books that helps bolster Oxfam’s reputation as a wide-ranging expert on development issues.

After the horror of the famine in Ethiopia shocks the world, supporters donate £12.5m in four months – enabling us to provide urgent help to thousands of people.

Jonathan Dimbleby, Roy Hattersley, Ted Heath and Joanna Lumley help launch an initiative to raise funds and awareness for Oxfam’s food work. Within a year, Oxfam has a network of more than 300 groups nationwide.

20,000 supporters of Oxfam and other charities join the biggest ever lobby (at the time) on parliament to call for more aid, especially to Africa. One million people sign a petition in support.

It might not have the most glamorous name, but the launch of the Gender and Development Unit (or GADU) is definitely a landmark moment. GADU focuses money and attention on women’s development.

First Red Nose Day. Oxfam sells the plastic noses that quickly become synonymous with the biannual festival of life-changing comedy. We’ve been closely linked with Comic Relief ever since.

In a fantastic recognition of our work to fight poverty worldwide, we’re nominated for the Nobel Peace Prize. Rigoberta Menchu wins the award for her work on ‘social justice and ethno-cultural reconciliation’.

We provide stewards at the Somerset festival for the first time, setting the foundations for a relationship that continues to this day. We’ve since provided stewards, campaigners and shop staff to more than 100 major UK events, raising £5.8 million in the process.

We launch the £2-a-month scheme – and with thousands more people donating, we can help even more families leave poverty behind for good.

What did we do before the internet? Well we didn’t use this website, for one thing. Not until 1996, anyway.

We open our UK poverty programme, supporting struggling communities at home and highlighting the links between poverty here and overseas.

The Oxfam bucket, specially designed for use in emergency situations, is nominated for a Millennium Product Award.

The Oxfam shop makes its first inroads into the digital age with a series of activities including online auctions. Six years later, Oxfam becomes the first UK charity to have a bespoke online shop.

The first charity gift catalogue of its type, Oxfam Unwrapped enables people to give their friends and family gifts that benefit people in developing countries. It’s now raised more than £50 million.

A huge year in the fight against poverty. 8 million people in the UK show their support by wearing the Make Poverty History white wristband. And at the G8 in Gleneagles, world leaders agree to increase aid and cancel the poorest countries’ debt.

Our first UK-wide music festival Oxjam launches with 3,000 events, organised and promoted by supporters all over the country.

Supporters of Control Arms (a coalition between Oxfam, Amnesty International and IANSA) celebrate a major victory as an overwhelming majority of the world’s governments vote to start work on an international Arms Trade Treaty.

Oxfam launches the Be Humankind brand, to inspire support and encourage even more people to help end poverty for good.

We launch the Here & Now campaign ahead of the momentous UN climate discussions in Copenhagen. But despite 100 million people taking action with Oxfam globally, world leaders fail to deliver the climate deal that’s (still) desperately needed.

Celebrity photographer Rankin travels to the Democratic Republic of Congo with Oxfam for a second time, returning with stunning shots to help raise awareness of the impact conflict has had on people in the country.

Oxfam is chosen as the Charity of the Year for the Virgin London Marathon. More than 350 runners join our team and raise thousands of pounds for Oxfam projects around the globe.

Oxfam's all over the world join up to launch the GROW campaign and help create a world where everyone always has enough to eat.

Thanks to you, we're moving closer and closer to a world where no one lives in extreme poverty.

First hand accounts from the people we work with about the impact of Oxfam's support.